No products in the cart.

Davidstow’s Catch of the Day

Way of Life > South > Davidstow’s Catch of the Day

There is nothing quite like getting up early to see a sunrise, and there is certainly no Cornish sunrise quite like the view you get looking out over the working fishing port of Newlyn. Newlyn is a thriving fishing village on the south coast of west Cornwall and sits between Penzance and its charming neighbour Mousehole. With stunning views across Mount’s Bay towards the majestic St Michael’s Mount illuminated on the horizon under a band of grey, Newyln is a very special place to visit. The sheltered harbour is crowded with small fishing vessels, crab pots and sailing boats – it’s a hidden gem worth celebrating on our culinary tour of Cornwall, a village preparing to share Cornish treasure with the world. The sleepy, early morning experience of visiting Newlyn is a bustle and a blur. Full of the muffled noises from boats unloading their haul into the local Fish Market nestled on the quay and from there transporting their iced catch to the fleet of waiting trucks, shipping fresh fish around the country. Gulls patrol the sky searching for leftover bait in pots and the world awakes.

The romantic view of Newlyn and bewitching glimpse at its fishing heritage doesn’t reveal the harsh realities that fishermen face everyday, nor how badly this hard-working industry has been struck by the Covid 19 crisis, but before the first coffee of the day, it’s easy to get caught up in the golden light, drifting clouds and dreamy vantage point over-looking such a beautiful port. It’s no surprise that the famed Newlyn School was drawn to the village from the 1880s until the early twentieth century. This colony of artists of fell in love with the fantastic light and were fascinated by the fishermen’s working life at sea and everyday harbour life. In Newyln, I feel you get a real sense of the Davidstow way of life and can experience firsthand that taste takes time.

This month, I want to cook up another Cornish meal that celebrates Davidstow cheddar and the other great ingredients from around the county. The seafood from Cornwall is prized by chefs around the UK as some of the very best in the land and although I’m biased I think that the fish landed off the coast of Cornwall is some of the very best in the world. Over-fishing has lead to many problems but nowadays the smaller boats fishing out of Newlyn have found a good balance landing lesser known species that are slowly gaining in popularity. I often enjoy cooking some Megrim or Cornish Sole as it’s known down here, or a fillet of Pollock over the more popular cod and haddock.

The Cornish sardine is another fantastic fish that is particularly famous in the legendary Star Gazey Pie from Mousehole, just round the coast. It was here that many years ago, in a time of local famine and hardship, a fisherman went out in a storm and came home with a huge catch that saved the village. The whole village then cooked a massive fish pie with the fish heads poking out of the top of the pie’s pastry gazing at the stars. I’ve cooked star gazey pie a few times myself and I love the taste and celebrating the story, but for me a proper fish pie for the family needs a decent layer of cheesy potato on top.

The notion of cooking a homemade pie may have slightly gone out of fashion in recent years, but it’s fair to say that nothing relieves stress like a large slice of pie. This Cornish fish pie recipe uses the special 24 month aged mature Davidstow Cheddar and a pinch of saffron to celebrate our Cornish gold.

James Strawbridge is the author of The Artisan Kitchen and Davidstow Cheddar’s Cornish  development chef. 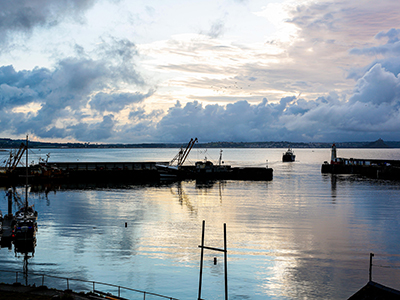 We treat your personal data with care, view our privacy notice here.